Today we’re celebrating women around the globe who are leaders in all walks of life. At Paddy’s we’re continuously inspired by our #paddystaffers and women all over the world pushing the limits within the sphere of outdoor recreation and adventure. For decades now, women have been climbing higher, running faster, walking further, bagging more peaks, and leading groundbreaking social and conservation efforts to protect our outdoor playground. In Australia and internationally, there are a plethora of women breaking boundaries, but we wanted to highlight 3 women who are attaining the seemingly unattainable outdoors.

At the unthinkable age of only 13 years old, Angie Scarth-Johnson is a born and raised Australian setting records in the world of climbing. She is busting down any age and gender stigmas that may have stood in her way, and has a massive future ahead of her in terms of this physically demanding sport. Angie has been sponsored by The North Face, and joins the Australian team as the first female climber, and of course, the youngest in all disciplines. Angie is a role model for young climbers and for young women. Her goal is to inspire others to follow their dreams. Angie travels the world with her family to conquer different rock faces and cultivate her skills, and she works hard to balance her education with sport and fun. Angie was born in Canberra but currently resides in the Blue Mountains, Australia’s internationally renowned climbing haven. Here, she is exposed to and inspired by some of the country’s best talent in the sport. Even at a young age, Angie has an impressive list of career highlights including being the youngest person to ever send a grade 31 at age 9 (‘Swingline’ at Red River Gorge, USA), as well as being the youngest person to send a grade 32/33 at age 10 (‘Tijuanita/Welcome to Tijuana’ in Rodellar, Spain).

“I love everything about climbing, the best thing is being outdoors, going somewhere new and exploring the area to find the perfect climb for me.  I also love all the different people that I meet from so many different cultures.” – Angie Scarth-Johnson, The North Face Blog

We’re thrilled to see people of all ages, backgrounds and abilities taking on adventurous challenges offered in the outdoors! 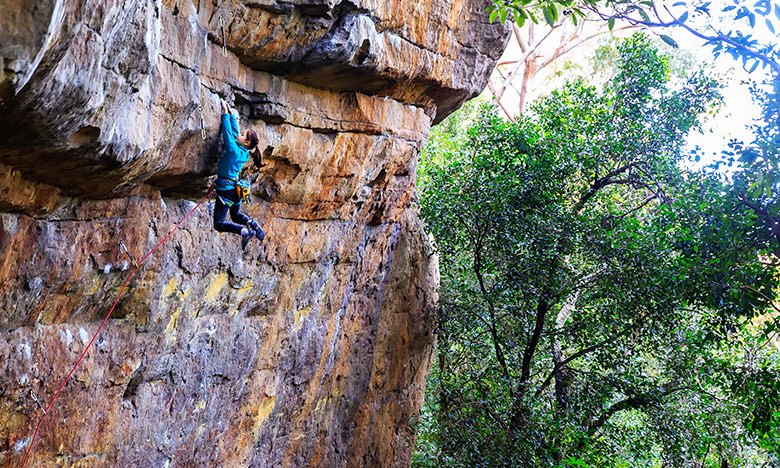 Samantha McMahon is a courageous Mountaineer who has faced physical adversity on her inspiring quest to become the first Australian woman to conquer 14 peaks in the Himalayan ‘Death Zone’. At the age of 22, Samantha had suffered a broken leg in a car accident, a broken hip while participating in Melbourne’s Run For The Kids, and after two unsuccessful follow up surgeries she was told she would need a hip replacement. Despite these physical injuries and the emotional and mental barriers that would accompany them, Samantha’s resilience is demonstrated as she continues to bag peaks and conquer some of the planet’s highest mountains. She is on the move to summit 14 individual mountains in the Himalayas that peak at over 8,0000 metres. The area in which these peaks stand is infamously named the ‘Death Zone’ thank to its sky scraping altitudes with unsustainable oxygen levels.

Following her ascent of Manaslu, the world’s eighth highest mountain, the courageous young woman from Victoria will set off next month to climb both Everest (8,848 m) and Lhoste (8, 516 m). If successful, Samantha will be the first Australian woman to climb both mountains in the same expedition (unassisted).

After leaving Nepal days before the shocking 2015 earthquake, she knew her skills as a social worker could be put to use in the country’s state of emergency. Samantha agreed with a statement that suggested most people initially go to Nepal for the mountains, but return for the people, and this is exactly what she did. She was keen to give back to a country that offered her so much in its natural wonders, and as such she used her social working skills to educate teachers about how to help children overcome trauma.

We wish Samantha all the best on her epic adventure among the peaks, keep making Australia proud!

Samantha McMahon at the summit of Ama Dablam.

Samantha Gash is an Australian endurance athlete who makes her steps count as a social entrepreneur. She strives to connect her running game with social change in the realm of female empowerment and access to education programs.

Her career highlights are dotted around the world, taking on the elements in different countries, varying weather conditions, and a wide spectrum of cultures. Most notably, at age 25, she became the first woman (and at the time, youngest person), to proudly finish the Four Deserts Grandslam. This challenge comprises of four 250 km ultra marathons run in four different deserts (Atacama, Gobi, Sahara, Antarctic), in only one calendar year. This powerful young woman has leveraged her endeavors as a way to raise both funds and awareness for initiatives such as the Save the Children education initiative in Australia as well as multiple global World Vision education initiatives. Another one of Samatha’s career highlights achieved on national soil was her completion of a 379 km non-stop run across Australia’s Simpson Desert.

It’s fantastic to see leaders like Samantha channeling their passions in order to make a difference on and off the trails!

Happy Internatinonal Women’s day from all the #PaddyStaffers!