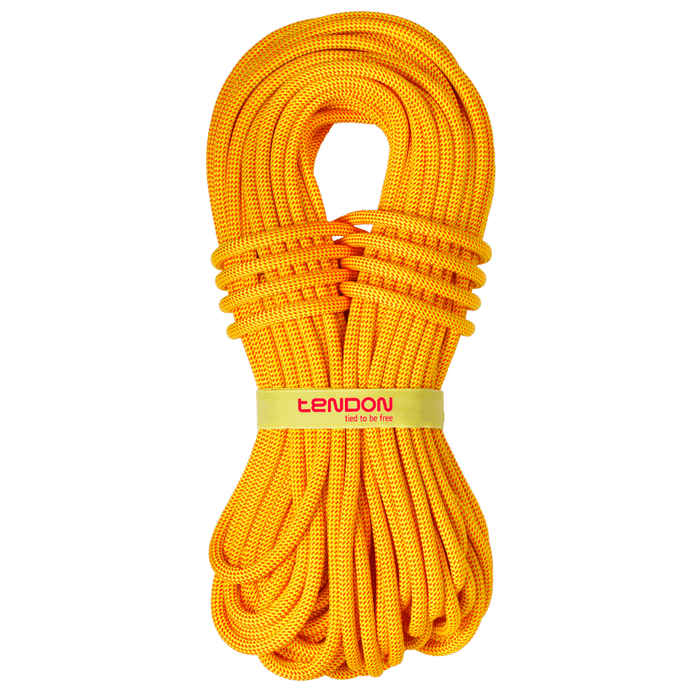 The Tendon Ambition 10.2 TeFIX Climbing Rope enriched with TeFIX® technology. The fact that the core is connected with the sheath prevents the sheath from shifting and provides maximum possible safety in case of the sheath damage. An ideal rope which will guide you through many vertical miles.

Single Rope - For ascent where only one rope is used. This is the most basic and widely used method of using rope for ascents.

Standard - Improved basic finishing of dynamic ropes. The new technological process enables the application of impregnation agents early in the standard finishing of the ropes.

Compact - TENDON's own special technology has been used for the ends of the rope. In a length of 15 mm, the core strand and sheath are connected into one unit.

Tefix - The TeFIX® patented technology permanently bonds the sheath to the core. It prevents from any slippage between these two basic rope parts. This particular feature was reached by adding a special material between core and sheath. This extra material is later also processed so that the bond is flexible and strong. The rope has a 0% sheath slippage, much longer lifespan, and better handling.

Midpoint of Rope - At half of the length, the rope is visibly marked by coloured band, which does not affect the core structure and its mechanical properties.

TeNOTE - New, revolutionary conception of the overall administration and registration of ropes which, thanks to NFC technology, offers unthought-of possibilities and brings user comfort to a hitherto unrecognised level. Rope includes microchip. With a PC and a mobile phone you obtain a quick, effective and smart tool for examination and maintenance of your ropes.

For orders under $49, a flat rate shipping fee of $9 applies. We use and trust carriers such as Australia Post and Startrack Express.

Our trusted shipping partners are Australia Post and Startrack Express. Please note, our online orders are only processed by our team Monday-Friday between 9:00am-5:00pm, except for public holidays. Your order will be dispatched within a maximum of 2 working days unless otherwise advised. Should you require a faster turnaround of your order, please contact us by email or phone.

We ship internationally to over 30 countries, to learn more about our international shipping offers, click here.

We offer free Click & Collect in our stores, in as little as 4 hours! Click the “find in store” button above, or select Click & Collect as your delivery option at the checkout to confirm item availability and pick up times.

Compare
Compare products
Remove All
You have no items to compare.