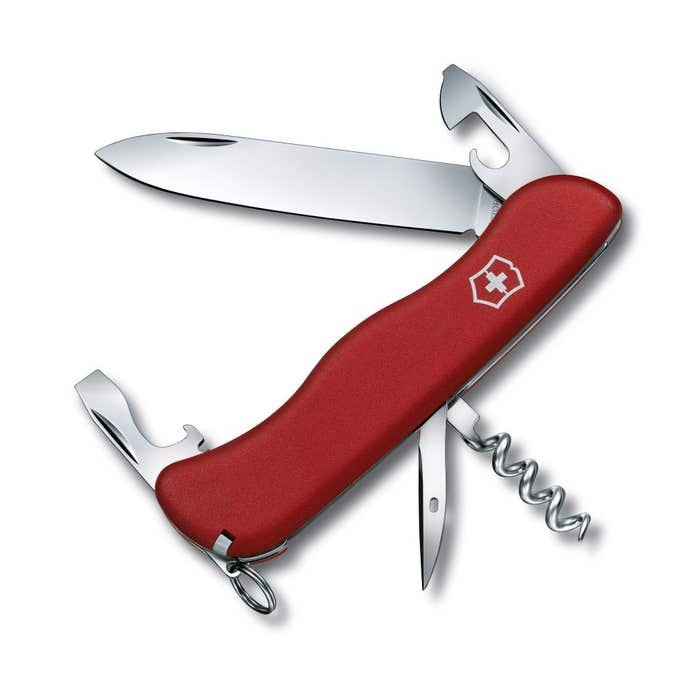 There's something about eating outdoors that makes everything taste a little better. Maybe it's the fresh air or maybe it's the feeling of freedom. Either way, you'll be the star of every picnic with The Victorinox Picknicker pocket knife in your basket. It's an entire kitchen drawer of tools that you can use to slice up and serve your entire meal. Bon appetit!

In 1884, Karl Elsener opened his cutler’s workshop in Ibach-Schwyz. At this time Switzerland was still one of the poorer countries in Europe. In the early years Karl Elsener worked to combat poverty and unemployment in the Schwyz basin, creating jobs and helping stem the flow of emigration.
In 1891 he supplied the soldier’s knife to the Swiss Army for the first time. He went on to develop the Swiss Officer’s and Sports Knife – now the iconic Swiss Army Knife – in 1897, creating the foundation for a flourishing company that would be able to hold its own on the world stage.
From then on, his spirit of solidarity, deep roots in the region and strong commitment to solid values shaped the Victorinox company philosophy.
Today, Victorinox is a global company with six product categories: Swiss Army Knives, Household and Professional Knives, Watches, Travel Gear, Apparel and Fragrances. The Swiss Army Knife is the core product and has a pioneering role in the development of all product categories.

Victorinox guarantees that its products meet the highest standards in all areas and quality is never compromised, regardless of the production site. The majority of Victorinox products – the Swiss Army Knives, Household and Professional Knives, Watches and Fragrances – are manufactured in Switzerland.
For reasons of expertise, Travel Gear and Apparel items are produced abroad, where the technical, staff and material resources needed for efficient manufacture can be accessed. To ensure that these products also meet the highest standards, partners are chosen carefully and the high quality standards are stringently enforced.
It is this level of quality that has allowed Victorinox to become a leader in Switzerland and the rest of the world.

For orders under $49, a flat rate shipping fee of $9 applies. We use and trust carriers such as Australia Post and Startrack Express.

Our trusted shipping partners are Australia Post and Startrack Express. Please note, our online orders are only processed by our team Monday-Friday between 9:00am-5:00pm, except for public holidays. Your order will be dispatched within a maximum of 2 working days unless otherwise advised. Should you require a faster turnaround of your order, please contact us by email or phone.

We ship internationally to over 30 countries, to learn more about our international shipping offers, click here.

We offer free Click & Collect in our stores, in as little as 4 hours! Click the “find in store” button above, or select Click & Collect as your delivery option at the checkout to confirm item availability and pick up times.

Compare
Compare products
Remove All
You have no items to compare.