The store will not work correctly in the case when cookies are disabled.

Be the first to review this product
Victorinox 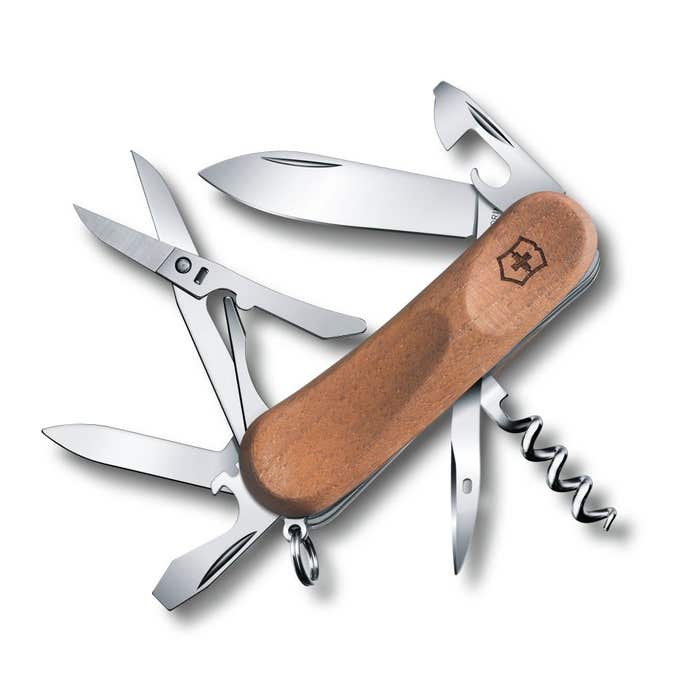 The Victorinox Evolution collection is made for people who like to think ahead. It features all the tools you need for all your everyday adventures, organized between specially formed scales that offer increased grip and stability. Work faster and easier with this little bit of evolution that fits in your pocket. FEATURES 12 functions Scissors Elegant wood scales

In 1884, Karl Elsener opened his cutler’s workshop in Ibach-Schwyz. At this time Switzerland was still one of the poorer countries in Europe. In the early years Karl Elsener worked to combat poverty and unemployment in the Schwyz basin, creating jobs and helping stem the flow of emigration.

In 1891 he supplied the soldier’s knife to the Swiss Army for the first time. He went on to develop the Swiss Officer’s and Sports Knife – now the iconic Swiss Army Knife – in 1897, creating the foundation for a flourishing company that would be able to hold its own on the world stage.

From then on, his spirit of solidarity, deep roots in the region and strong commitment to solid values shaped the Victorinox company philosophy.

Victorinox guarantees that its products meet the highest standards in all areas and quality is never compromised, regardless of the production site. The majority of Victorinox products – the Swiss Army Knives, Household and Professional Knives, Watches and Fragrances – are manufactured in Switzerland.

For reasons of expertise, Travel Gear and Apparel items are produced abroad, where the technical, staff and material resources needed for efficient manufacture can be accessed. To ensure that these products also meet the highest standards, partners are chosen carefully and the high quality standards are stringently enforced.

It is this level of quality that has allowed Victorinox to become a leader in Switzerland and the rest of the world.

1.Blade (Large) | 2.Corkscrew | 3.Can Opener | 4.Screwdriver 3 mm | 5.Reamer, POunch and Sewing Awl
Warranty & Services
Victorinox AG guarantees all knives and tools to be of first class stainless steel and also guarantees a life time against any defects in material and workmanship (save for electronic components 2 years). Damage caused by normal wear and tear, misuse or abuse are not covered by this guarantee.
Reviews
Add a Review
Product Questions
Delivery

Please note, we are currently experiencing delays in shipping times due to high volumes of orders. We apologise for the inconvenience. Should you need your order in a specific time frame, please contact our Customer Service Team prior to placing your order to confirm feasibility.

For orders under $49, a flat rate shipping fee of $9 applies.

Our trusted shipping partners are Australia Post, Couriers Please and TNT (FedEx). Please note, our online orders are only dispatched by our team Monday-Friday (excluding public holidays). Your order will be dispatched within a maximum of 2 working days unless otherwise advised. Should you require a faster turnaround of your order, please contact us by email or phone.

We offer free Click & Collect in our stores, in as little as 4 hours! Click the “Find in store” button above, or select Click & Collect as your delivery option at the checkout to confirm item availability and pick up times.

We ship Australia wide and to New Zealand. For more information regarding Shipping, please click here.